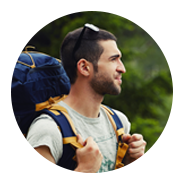 Before I met Dr. Fleming, I was an out of control drug addict, always trying to use drugs to make myself feel normal. My family was constantly trying to help me to break my addictions. But until we found Dr. Fleming and his neuroscience approach to change, we had limited success. When I met with Dr. Fleming he asked me what I wanted to accomplish? I told him I just wanted to feel like a normal person. I want to say that since I have been in his care that I am now drug-free of antidepressants, ADHD medicine, and illegal drugs. This is something I have wanted for more than 15 years. I have better moods, I can deal with my anxiety, I have no fears, I am more self-controlled.  I used to be very self-centered, and now I consider how my actions affect others. In my opinion this is a win-win. There is no negative to working with Dr. Fleming. I even have had some of my good friends for years tell me they really like the new me. I want to thank Dr. Fleming for his efforts and I want to also thank God for bringing Dr. Fleming into my life.

What People Are Saying About Dr. Fleming Himself….

Cabinet Member for the King of Jordan
"Dr. Fleming delivers a message of accountability in the workplace from a new and fresh perspective. Go beyond brainstorming. Ask the tough questions. Voice your internal dialogue. There is real financial (and emotional) profit to be enjoyed by businesses and business people who can master first allowing, and then examining, the truth."
Lori Thompson
Leadership Development Consultant and Editor of The Business Journal
"A provocative and highly constructive challenge to our basic assumptions. This book will have you re-thinking many of your existing ideas and practices."

Srini Pillay
M.D. CEO, NeuroBusiness Group Assistant Professor, Harvard Medical School
"We had the great fortune of working with Dr Kevin Fleming; producing a video series for Pfizer Colleagues in which he provided cutting edge strategies for managing stress. Not only did Dr Fleming afford these cutting edge strategies, his engaging approach on camera has produced an entertaining and highly informative resource for our colleagues. His work has captivated our colleagues and offered them a new and refreshing approach for managing 21st century stressors.My experience has taught me that a good coach can get others to believe in them and what they teach; yet a great coach can get others to believe in themselves and what they can achieve. Dr Fleming is that kind of a coach, one who can foster both action and ongoing change in others.His knowledge of neuroscience and human behavior is surpassed only by his integrity and genuine consideration of others.We thank him for one of the most successful campaigns we have provided to our colleagues."

What People Are Saying About the Brain-Changing Experience…..

Kevin really knows his stuff, and his expertise makes the treatment effective. But his kindness and compassion make the whole experience beautiful. As someone with neurological challenges, I found the treatments to be clarifying and settling. I was surprised that the treatments also reopened a deep sense of acceptance and intimacy with myself. My friends commented that it seemed as if a cloud had been lifted from me. Deep thanks Kevin
Nance Pettit
MS Psychology, MAC Accupunture
Asheville, NC
“Prior to working with Dr. Fleming I felt that I had a solid outlook and a clear direction which I desired for my life. However, I was experiencing a sort of “undulating cycle” and never really broke through the top of each prior phase with my efforts. The brakes were always being applied shortly after a small success beyond a previous “high mark” so to say.I somewhat skeptically engaged Dr. Fleming for help in learning how to obtain this upward shift in my life which I so much desired, but had given me resistance over and over again. So in I went with my skeptical yet open mind. Dr. Fleming immediately jumped right in with his genuine and unique approach to finding out what really matters most to a person. Within a few weeks I had realized a monumental shift in my own self with regards to what truly mattered at my core versus what I had been striving for year after year. This all occurred prior to the neurotech work and was already a complete success as far as I was concerned. On top of the amazing results I already experienced with Dr. Fleming’s coaching, the effects of the neurotech process were immediate for me. An instant clarity within myself, an unveiling if you will, had occurred. During the week of going through the neurotech process I even experienced quite an emotional curve ball from a personal situation that would have typically sent me off balance for weeks. Instead, my mind was able to process the event and come back to a balanced emotional state overnight. It has been less than a week since receiving the neurotech treatment and I feel an overall calm within myself, very grounded, yet free to experience life as it really is. It is like being reset back to a feeling I had within myself 20 years ago, yet I now have the privilege of living in this state of mind with the hindsight of experience. Truly amazing. Thank you.”
R.C.
Long Island, NY
“A couple of weeks ago I did Dr. Fleming’s Neurotech Brain-Work hoping for some real change. I have struggled for many years with some issues around feeling anxious and getting easily overwhelmed or scattered which was limiting me in my ability to move forward in the way I was envisioning I could. It was like my desire was right on track but my brain wasn’t following it.I had tried many things over the course of the years but I still could not get the changes to stick for longer than a few days, a week at best.I am now a True Believer in the work he offers. I felt changes were happening during the treatment, but could not quite place them. By the following week and weeks I began to really notice the shifts! There is more stability, focus and calmness in me. I have not felt that so palpably in the last decade. I am so inspired by what he offers that I have jumped on board in fully supporting his work and the benefit it can bring to those who are struggling with a need for positive change that actually works .Thank you Dr. Fleming.”
Rebecca M Justo
Miami, FL
“Dr. Fleming’s neurotech work with me was real, immediate, and synergetic in nature. I felt an improved sense if general well being after my first session, and the results compounded from there. My girlfriend said after the first two days that she had never never seen me this happy and relaxed since we met in May. I slept better, had a better mood, and was FAR less prone to bulimic tendencies -the thoughts, urges, eye simply faded. They didn’t vanish but they’re controllable now and fade more every day.This is key because I simply didn’t prior to treatment, not for the past seven years. Since I had this so long the memory of it is still strong and therefore it’s not completely out of my life. However, the urges are controllable, as are the side issues. I sleep like a baby now…….The before/after snapshots of my life are very different, in a very good way. You know that Claritin commercial where the film is pulled back and the lady sees life clearly? It’s exactly like that for my mental state.Thank you again. This has been life changing”
David
College Student, San Antonio, TX
“Grey Matters International, Inc provides a well-needed service in the sometimes trite and overly-motivation-based self and organizational development market. If you are seeking true behavior change solutions that last, Dr. Fleming’s thinking and tools are the way to go…..”